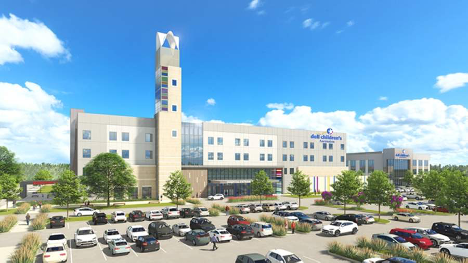 Who’s ready for some good healthcare news? MorningStar and other Williamson County families will soon have a state-of-the-art pediatrics hospital minutes away.

Ascension Texas recently announced plans to construct a new Dell Children’s Medical Center campus in far Northwest Austin, to be located at the intersection of Avery Ranch Boulevard and Toll 183A in Williamson County. This means that families in Cedar Park, Liberty Hill, Round Rock, MorningStar and other communities will have a pediatric facility in their own backyard.

According to press reports, When the hospital opens in November 2022, it will offer care for infectious disease, pulmonology, respiratory complications, neuroscience, gastroenterology, dermatology and ear, nose and throat complications.

When operational, the Dell Children’s Medical Center in Northwest Austin will be designated as a Level 3 Pediatric Trauma Center, Ascension stated.

The medical offices neighboring the hospital, scheduled to open April 2022, will further house medical and surgical subspecialists for patients for follow-up services.

Why Ascension Health Chose This Area

In addition to having a powerful economic base, Williamson County is one of the fastest growing areas in the state and nation. Northwest Austin and the Williamson County cities near its boundaries continue to be tremendous drivers of growth in Central Texas, according to federal numbers.

In comparison, the state of Texas’s entire population grew by 6.87 percent in that time frame, according to census bureau figures.

Planned communities such as MorningStar, with its convenient location to employment in Austin, resort-like amenities, proximity to the exemplary schools of the Liberty Hill ISD, quality builders and the natural beauty of the Texas Hill Country have become a magnet for young families. The addition of this pediatric hospital further adds to the array of healthcare options available to MorningStar families

“Ascension Texas has invested heavily in Williamson County, and we are extremely grateful that they have decided to continue that investment by selecting Williamson County as the location for their second Dell Children’s hospital,” Williamson County Judge Bill Gravell said in a May 7 news release. “In addition to bringing good jobs to the county, it also brings a huge peace of mind to our residents that our children and grandchildren can receive world-class health care right here in Williamson County.”

It is no coincidence that quality healthcare facilities such as the Dell Children’s pediatric hospital are moving in to serve communities along the Highway 183 corridor. Individuals, young families and empty nesters have discovered a better quality of life here.

If you would like to learn about this dynamic area and the easy living of MorningStar, just click here for a tour.