Here Come the Brides of MorningStar! 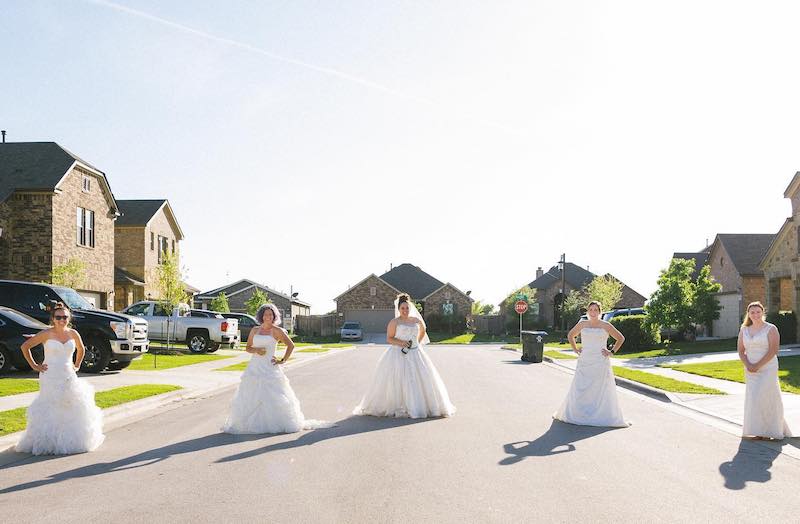 Sometimes when you’re stressed or bored or both, the playful part of your brain says, “let’s do silly things”. If you’re lucky, these silly things are inspired. Such was the case with five, otherwise sane women – wives and mothers – who all live in the same neighborhood of MorningStar, a charming community, just north of Austin.

These women and their families loved spending time together for block parties, swimming parties and just hanging out together. Then came COVID – 19 and “social distancing” put a crimp in these get-togethers. After a few days of this quarantine, these five friends realized that something wacky was in order and “Wedding Dress Wednesday” was hatched. They decided to pose in their wedding dresses for a fun photo shoot.

Elyssa Seibel, a professional photographer, said the wedding shoot was the brainchild of her and the other women: Jamie Egloff, Bryce Ellerbroek, Shannon Thomas, Nina Wagner and Jaime Sladek. As you can imagine, word gets around quickly in the close community of MorningStar and pretty soon, ABC’s “Good Morning America” was on its way to capture this fun for the rest of the world to enjoy. These comments were from that network feature.

“Nina decided that a fancy wine night was exactly what she needed and so she proceeded to put on her wedding dress and take a picture of it—and let me tell you, she had a blast,” Seibel explained. “After a few glasses of wine, she decided to call it ‘Wedding Dress Wednesday’ and that’s when my photographer brain snapped on. I asked in our group chat how many of the women could come outside in their wedding dresses to take photos, and no one hesitated.”

The challenge of this unique photo-shoot was definitely NOT the shyness of the models – they were ready to get out of the house and rock with their neighborhood gal-pals. Keeping everyone six feet apart while still in the shot was the struggle, but they made it work.

“The posing was crazy because we’re always used to being up in each other’s business, so having to keep that strict separation was tough,” Seibel said. “I somehow was still able to come up with a few creative poses while still having them remain six feet apart and still all be in one frame.”

The MorningStar community, with its resort-like amenities, gorgeous Texas Hill Country views and great schools is also legendary for its close-knit neighborhoods. Everybody knows everybody and they all know every kid.

Seibel said the entire neighborhood is accustomed to spending time with one another. Between the six women, they have 14 children and every Friday the families block off the street and play hockey and football or just catch up. But since the pandemic, they’ve been catching up over the phone instead and have been missing one another.

The photo shoot in their wedding dresses was a fun way for the women to take their minds off the current crisis.

Jaime Sladek, a teacher who took part in the shoot, called it a “much-needed stress relief.”

“It had been a rough day trying to manage online classes and there are so many changes at home,” Sladek said. “There is a lot of disappointing news right now… so just being able to get out on the street and see each other as we’ve never seen each other before was a really good feeling. It was so ridiculous but it brought a lot of joy.”

For many, the pandemic has been stressful and even terrifying. For these six women who are neighbors in MorningStar it is a reminder of just how important friends and neighbors can be.

If you would like to see what a real community looks and feels like, click here for more information on MorningStar. Then make the short drive north of Austin. Wedding dresses are optional.